“Even if I die, even if I am beheaded, or killed by bullets – I will not back down. Our community will never leave the battlefield and run away.”

“We will take our rights back, these laws have to go,” Gurjit Singh, an ex-military man and now a farmer, tells Sky News.

He is among thousands of farmers, mainly from the northern states of Punjab and Haryana, protesting the three laws passed by the Modi government in September.

Denied entry into Delhi to protest, they have all camped on most of the major roads and highways leading into the city.

They have been supported by farmer organisations from other states who are joining in.

The Singhu border is the nerve centre and has the largest numbers of farmers gathered.

It is like a mini township with hundreds of tractors and trolleys, pick-up trucks and vehicles that have blocked this main highway, almost choking the capital.

It is one of the largest farmer protests in recent times. The government has been taken by surprise by the resilience, tenacity, and support for the farmers, not only from within but also from other parts of the world, due the large Sikh diaspora worldwide.

Farmer Sukhmer Singh Cheema, 82, from Punjab says: “In my lifetime I have never seen such a protest. Despite the pandemic, cold weather we have camped here against the laws, it’s not only for ourselves but for every section of this country.”

Langars – or free communal kitchens – have sprung up everywhere providing hot meals, tea, coffee and snacks to thousands of protestors and anyone who wants them. The Sikh community is known for such services to society.

There are a number medical stations manned by doctors, nurses and volunteers who provide free consultations, medicines, and masks.

Many protestors are elderly – camping out in the bitter cold in their makeshift homes on tractors and in tents.

“There are far more people donating blood than we can handle, we asked them to come back tomorrow. They all want to serve humanity even while protesting,” he says.

Farmers argue the three federal laws will deregulate crop pricing and eventually dismantle the minimum support price system that guarantees them an income and leave them vulnerable to large private companies.

The government argues the laws will abolish middlemen and improve farmers’ incomes, as they will have a wider market to sell to.

The farmers here are not convinced of the laws, nor the government’s intentions of doing it during the coronavirus pandemic. 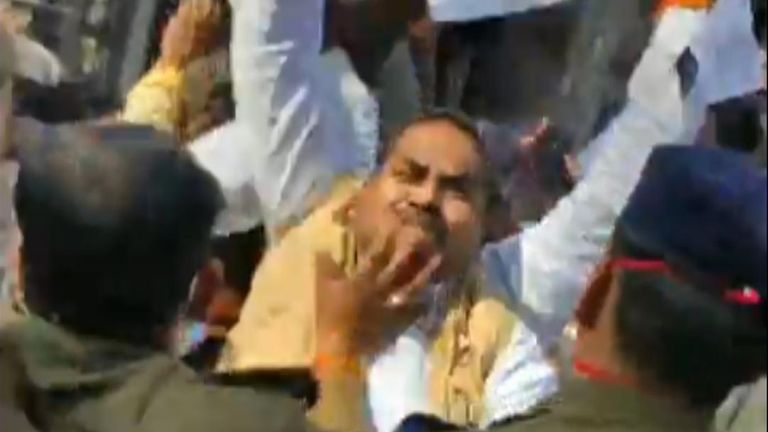 There is a gaping trust deficit which is widening by the day. Talks between leaders of the farmer unions and the government, led by the agricultural minister, have so far had no results, as both sides have dug into their demands.

Amarjit Singh, a farmer from Haryana, says: “These laws are like a warrant against farmers and the more the government delays in revoking them, the more it is harming itself. We will fight till our end.”

Security at the Singhu border is unprecedented. Shipping containers, trucks filled with earth, rows of concrete blocks chained to each other topped with razor wire, anti-riot and water cannon vehicles and many buses are stationed here.

All manned by a posse of Rapid Action Force – a specialised paramilitary wing that deals with riots and crowd control backed with a large number of Delhi Police personnel.

The farmers say they are here for a long haul and have provisions and resources to last a few months. They have developed a relay system where a few of them head back to tend to their fields and homes while a new group take their place with new vigour.