The latest round of talks on a post-Brexit trade deal “did not go well”, Sky News understands, with a UK source suggesting that hopes of an agreement are now “receding”.

This is the issue of preventing unfair competition on state subsidies and standards once Britain has left the bloc. 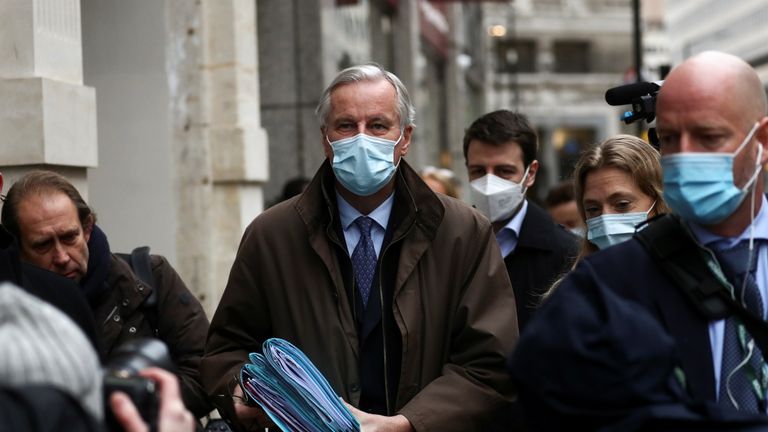 “Both sides had previously indicated that while there wasn’t total agreement, they thought they had found a path through that very tricky issue,” Coates said.

“This evening the UK side is suggesting that the EU side have introduced some new elements that complicate that discussion.

“We don’t have the specifics of what has gone wrong, but they are suggesting that this is a material change for the worse and puts in jeopardy hopes – and there had been quite a lot of hopes – that we might get a Brexit deal possibly on Saturday or Sunday this weekend.

“They suggest that is now receding.”

It is understood that EU chief negotiator Michel Barnier will return to Brussels on Friday. Raab: Brexit talks into ‘last week or so’

But his negotiating team will remain in London over the weekend, with more negotiators heading out to join them, an EU source has told Sky News.

Both sides have been locked in talks in a bid to agree a trade deal before the end of the month, when Britain will leave the transition period.

If no agreement is struck, the UK will trade with the bloc on World Trade Organisation terms from 1 January.

This would mean tariffs being in place in both directions, which would potentially feed through to higher prices for consumers.

Britain left the EU at the end of January and entered into an 11-month transition period, following EU rules and regulations whilst trying to negotiate a free trade deal.

But a breakthrough so far proved elusive.

As well as issues around the “level playing field”, fisheries has emerged as another key sticking point in the discussions.

Boris Johnson has said in the past that Britain will prosper outside of the EU, even if there is no trade agreement in place.

But the Office for Budget Responsibility has said a failure to strike a deal could see a 2% hit to gross domestic product.