It will take “some months” for the UK’s most vulnerable people to be vaccinated against coronavirus, the prime minister has said.

Speaking at a Downing Street news conference, Boris Johnson acknowledged there will be “immense logistical challenges” in distributing the Pfizer/BioNTech vaccine, which has approved for use in the UK.

Live updates on coronavirus from UK and around the world 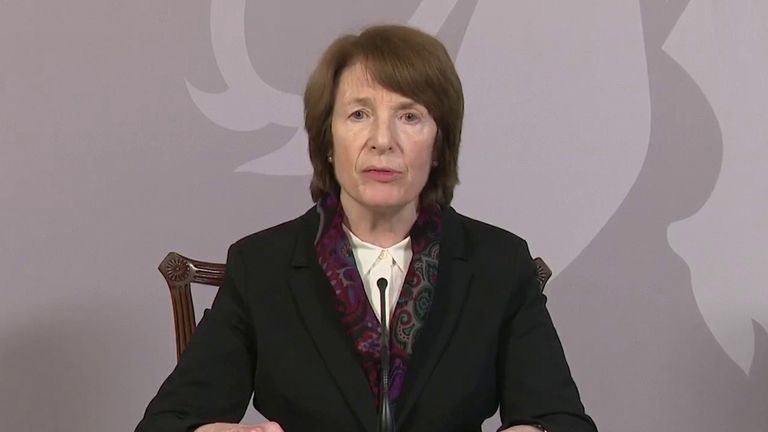 “It will inevitably take some months before all the most vulnerable are protected – long, cold months,” he said.

“So it’s all the more vital that as we celebrate this scientific achievement we are not carried away with over-optimism or fall into the naive belief that the struggle is over.”

The PM was speaking after the UK became the first country in the world to approve the Pfizer/BioNTech vaccine.

The jab, which has been given the green light by independent health regulator MHRA, will be rolled out across the UK from early next week.

Elderly people in care homes and their carers are top of the list to get the vaccine, which studies have shown is 95% effective and works in all age groups.

The government has secured 40 million doses of the COVID-19 jab, which needs to be refrigerated at -70C (-94F).

Ten million are expected to be delivered to the UK by the end of the year, with patients needing two each.

Mr Johnson’s call for patience was echoed by the deputy chief medical officer Professor Jonathan Van-Tam, who appeared alongside the PM.

“Rollout won’t be instant,” he warned, as he called on people to stick to the current restrictions and general guidance over the coming months.

And he said the vaccine was a “complex product with a very fragile cold chain”.

“It’s not a yoghurt that can be taken out of the fridge and put back in multiple times,” he said.

Sir Simon Stevens, chief executive of NHS England, said the majority of vaccinations will take place in “January through to March or April for the at-risk population”.

The rollout of the vaccine will start at 50 “hospital hubs” in England next week, Sir Simon told the news conference.

Again stressing this would be “logistically complicated”, he said: “We have to move it around the country in a carefully controlled way initially at minus 70 degrees centigrade, or thereabouts, and there are a limited number of further movements that we are allowed by the regulator to make.

“It also comes in packs of 975 people’s doses so you can’t at this point just distribute it to every individual GP surgery or pharmacy as we normally would for many of the other vaccines available on the NHS.” 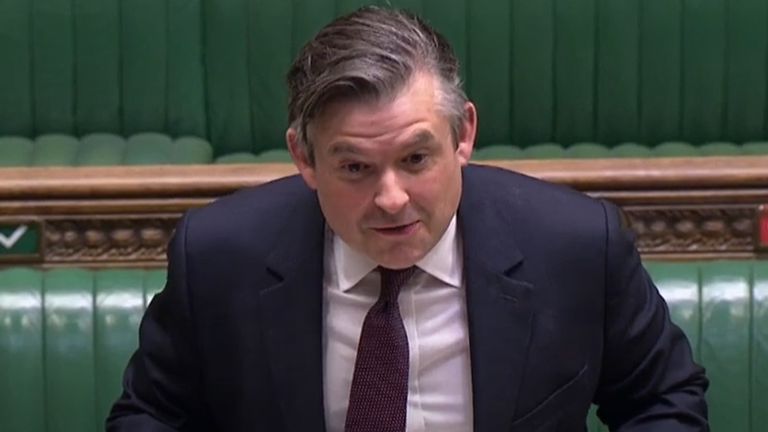 Hancock offers to get jab alongside Labour’s Ashworth

“If the MHRA, the independent regulator, as we expect they will, give approval for a safe way of splitting these packs of 975 doses then the good news is we will be able to start distributing those to care homes,” he said.

“And then as even more vaccine becomes available finally we will be able to switch on large vaccination centres across the country and indeed invite local community pharmacists probably at the beginning of January to begin to offer vaccination as well.”

The government’s Joint Committee on Vaccination and Immunisation’s (JCVI) priority list for the first phase of the vaccine rollout is as follows:

Professor Van-Tam also appealed to people on the fence about vaccines, saying: “We need people to take it – this vaccine isn’t going to help you if you don’t take it.”

Health Secretary Matt Hancock has said he is unsure how many people would need to be immunised before restrictions can be lifted.

He told the Commons earlier that while it is known that the vaccine protects an individual against the virus, it is not yet clear whether it has an impact on reducing transmission.

Meanwhile, the PM’s press secretary has suggested Mr Johnson could have a jab live on TV – but only if it did not prevent someone more in need from getting one.

After countless Downing Street press conferences where so much about the future was in doubt, Boris Johnson set out to deliver a message underpinned by certainty.

This evening there was no need for graphs, terrifying projections or colour-coded maps.

He said he was now “certain” the arrival of a clinically approved vaccine meant there was a way out of the pandemic, but he was equally sure “the struggle isn’t over” and that the “plan does depend on all of us continuing to make sacrifices”.

But despite attempts by Mr Johnson to capture the moment with martial arts metaphors, it was the deputy chief medical officer Professor Jonathan Van Tam who seemed to capture those dual certainties with greater impact and eloquence.

He said he was “quite emotional” about the news this morning and reassured the public they were right to feel that way too.

“Everyone needs to be delighted with the news today” he said “but equally patient and realistic”.

And the reason for the need for the certain need for patience was laid out over the course of the press conference.

The key example was the acknowledgment that despite care home staff and residents being considered the most vulnerable category, the Pfizer vaccine will not be easy to get to them.

Cases of the vaccine contain 975 doses, and those consignments cannot be separated down into smaller units..

Those cases would be too large for most individual homes, so it will require the medical regulator to change its permissions for this particular vaccine or the approval of the less logistically demanding Oxford/AstraZeneca vaccine, for doses to be quickly rolled out.

Even if this particular challenge were to be overcome, head of the NHS Sir Simon Stevens made the point that even the most vulnerable are unlikely to get the required second dose until the New Year, so the need for social distancing and other restrictions will still be required for some time to come.

Indeed, Jonathan Van Tam suggested he did not believe COVID-19 would ever be entirely eradicated and was likely to become seasonal like flu.

“Do I think we be able to throw a big party like the end of the war? No I don’t”, he said, adding that he thinks some of the habits of handwashing and keeping some distance could be enduring.

That seemed to alarm the prime minister, who perhaps saw it as undermining the message of certainty that normality would return.

It was a revealing moment, because it seemed to gives a sense of Mr Johnson’s personal metric for success.

So much so the deputy chief medical officer felt the need to clarify he was talking about habits, rather than an enduring need for government restrictions.

“Well, who knows, who knows” said the PM, uncertainly.